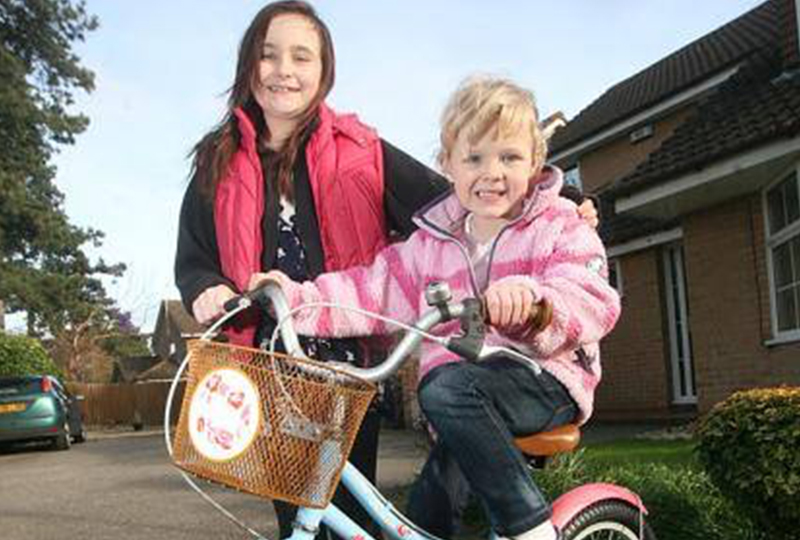 TEN-YEAR-OLD girl has spent her birthday and Christmas money buying a new bike for a five-year-old girl with leukaemia.

“I just wanted to help another little girl have a bike, so she can ride around with her friends like I do,” said Codie.

“I had lots of presents for birthday and Christmas so I asked my mum to help me get in touch with CFC and donate some of my money.”

Phoebe was diagnosed with leukaemia when she was three years old and since then she’s been going through intense bouts of chemotherapy.

“The last two and a half years have obviously been very traumatic for her, they go through hell really,” said her dad, Chris.

The Stratford Primary School pupil is now off the chemo and back at school.

For the next two years she will be closely monitored to see how well the treatment worked.

But months and months of chemotherapy took its toll on her little body. She had to use a wheelchair for three months, and was forced to learn to walk again.

The new bike is intended to help her regain the strength in her legs.

“She had a bike before she was diagnosed and she really enjoyed biking,” said Chris.

“Although she’s very strong willed, obviously we have been trying to wrap her up in cotton wool.”

The cancer charity also gave bikes to Phoebe’s parents and her brother, so the whole family can go out cycling together.

And as a ‘thank you’ to the charity, Chris signed up to ride 100km in Cycling Fighting Cancer’s charity ride at Stratford Racecourse on 25th May.

But he was blown away by Codie’s generosity: “I can’t imagine many ten-year-olds would do what she’s doing.

“It’s fantastic that someone that young appreciates what others are going through.”

Charity trustee and volunteer, Camilla Harrison, organised the meeting between Codie and Phoebe.

She said: “It was great that Codie was able to come along to the handover of the bike awards and see exactly how her money had been spent and the enormous smile on Phoebe’s face when she saw her new bike.

“We award bikes all over the UK, so to be able to match up local funds with a local family was a lovely opportunity for us.”