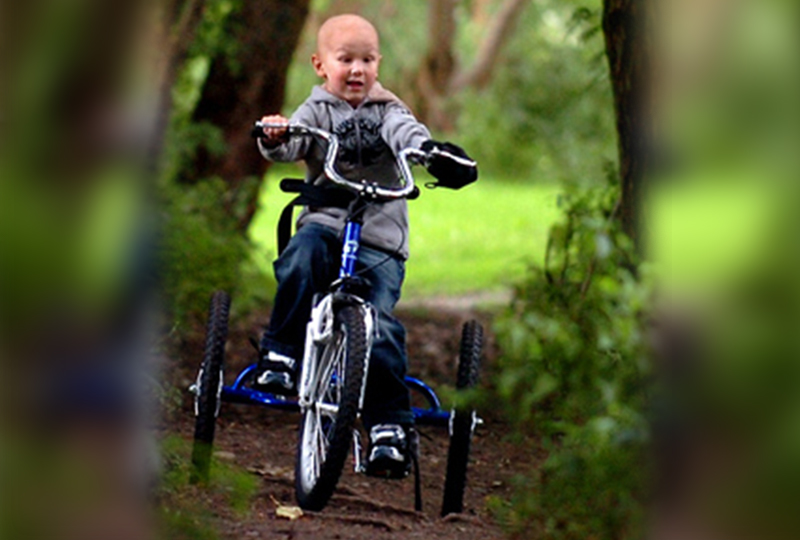 I’d love to tell you about my patient Dale and the difference your charity has made to his life.

Dale was diagnosed with a brain tumour last year when he was seven years old and  he is the youngest child in his family. He became unwell with head aches feeling sick weak and wobbly and poor vision and tiredness. A scan showed a tumour in his brain that needed treatment with surgery, radiotherapy and a years worth of chemotherapy.

This was obviously a difficult time for Dale and his family, unfortunately Dale developed a left sided weakness and a rare complication called posterior fossa syndrome after his surgery. At first he couldn’t speak or swallow or move about in his bed without help. Dale became very distressed when any medical staff came near him and was understandably very frightened.  His family were fantastic in helping and encouraging Dale to work with the Physios and Occupational therapists to help him recover as much movement and function as possible.

Over many months and with lots of hard work from the therapists Dale and his family he made slow steady progress. Dale remained very wobbly and struggled to use his left hand but this has gradually improved and he is now walking independently if a bit precariously using a splint on his left leg. He also wears a splint on his left hand to help him to use it. He has gone from not talking to talking non-stop, wanting to tell us secrets and stories, He has an inquisitive nature and we had to explain all the workings of every piece of equipment we ever used with him, in fact I think we have an engineer in the making!

As part of his Physio Dale had regular hydrotherapy which gave him the support and freedom to move about in the water without anyone holding on to him. (We were always close by in case of unexpected diving to grab water pistols and squirty toys!)

We became aware of your charity and Dale was provided with an adapted cycle which then gave him the freedom he had in the pool on land. Dale loves his bike and was able to pedal round and move independently, just like his friends. He helps to take his two dogs for a walk by the river with his family and loves the freedom that his cycle gave him. He has now improved so much that some of the adaptations he originally needed have been taken off the bike.

I’d like to thank you and all the people involved with your charity for making a little boy and his family very very happy.