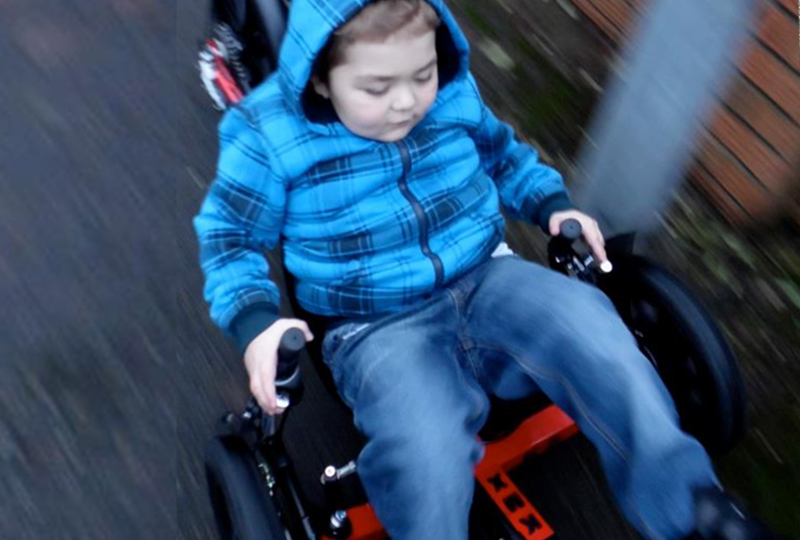 Toby in his kart.

Toby is now aged 9 but has been undergoing intensive treatment since he was 18 months was born with a genetic condition called SCID ( Severe Combined Immune Deficiency). It affects only 1 in 1 million and is often referred to a “boy in the bubble syndrome”. As Toby was born without an immune system, even a common cold could be life threatening. Dis regulated T cells attack and damaging organs and left untreated it causes tumours throughout the body.

Toby underwent a Bone Marrow Transplant in Gt Ormond Street Hospital in June 2007. However, there have been a number of    complications over the years with graft verses host disease, intestinal failure resulting in years of Intravenous Nutrition (TPN) and nil by mouth intake. Chronic haemolysis with blood counts of 3.6 with 11 to 14 being normal range despite a spleen and gall bladder removal. Septicaemia with total organ failure resulting in being a inpatient in Intensive Care Unit at Sheffield Children’s Hospital for 3 weeks with a long recovery period. With to date 35 trips to theatre for operations and procedure and over three years as an in patient in hospital.

Toby’s thymus gland is only partially functioning the allows the body to recognise infections and how to fight, recognise and memorise them. It is hoped that in time this may start to work with the fantastic Care he receives from Sheffield Children’s Hospital and ongoing chemotherapy treatment and infusions of antibodies etc. Toby is in main stream school and doing really well. He’s kept up with a child his age due to enthusiasm and love of doing normal things and being with his friends is essential to his mental strength that allows him to handle the medical worries in his life.

We met Cyclist Fighting Cancer at the Do It For You Day Cancer Day organised by Sheffield Children’s Hospital where they had a broad spectrum of activities to do under supervision. Toby spotted a funky KMX bike and shyly asked me “do you think they would let me have a go”. Toby although 9 due to prolonged steroid use is only the size of a 3 year old. He has osteoporosis and crushed vertebra in his spine so needs a wheelchair on trips out. He tires easily and we have found it really difficult to find a bike that meet his needs, that is not like a toddlers bike so he fits in with his peers. The Charity couldn’t have been more helpful and encouraging, moving the seating position so his legs could reach the pedals. He came away talking about it and they had taken our details, we received some literature in the post and were encouraged to apply.

Toby was so excited when we told him our application has been accepted and even more so when he found it was the same bike he had test ridden ! He got the gift from CFC on Christmas morning and declared it was “AWESOME” ! First thing he did was ride down to show his best friend. It’s going to take sometime to build up his stamina and strength but at least now we have the opportunity of doing so. The seating position means he can rest at intervals and it feels very stable so his confidence is greater than a regular bike. This bike has opened up a big opportunity and our family is very grateful to CFC, thank you.