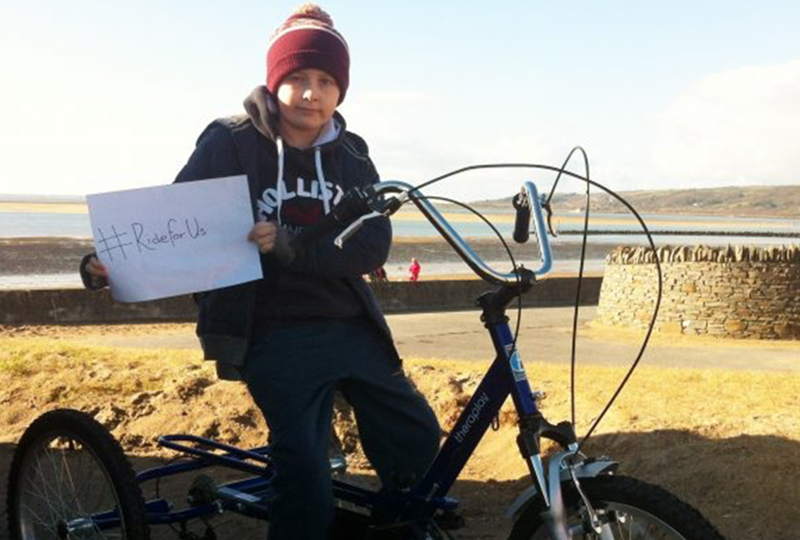 My son, Jameson is 14 months into his battle against Medulloblastoma. Jameson has really struggled with the side effects of both radiotherapy and chemotherapy through the whole of his treatment. This along with his diagnosis had sent Jameson into a deep depression.

As a father, seeing my son like this was the worst thing I could imagine, he was far from the boy who loved being out in the street, playing on his beloved bike. When talking to Jameson about how he was feeling he would always say he just wants to be like the ‘normal’ kids and play on his bike.

Jane Cope, Jameson’s community nurse put is in touch with CFC who arranged for a representative to come and see us from Theraplay.  They spoke to Jameson and showed him some options of trikes specially designed for children with additional needs.  Jameson’s face lit up instantly! On choosing a trike the Rep said he had one in the van for him to try… it was the most tear jerking moment I’ve had in a long time! Just to see him smile and see him ride with his friends.

After receiving Jameson’s trike, he wanted to be on it all the time. It has helped him build up his leg muscles and in turn helped his stability.  He seems to have so much more energy now he uses it regularly. It has also helped us bond back together as a family, as the bombshell of Jameson’s diagnosis really took its toll on us.

We now have family time on the bikes and Jameson loves it. He is so much happier and no longer in depression! All this was made possible by CFC and I and my family will always be eternally grateful.