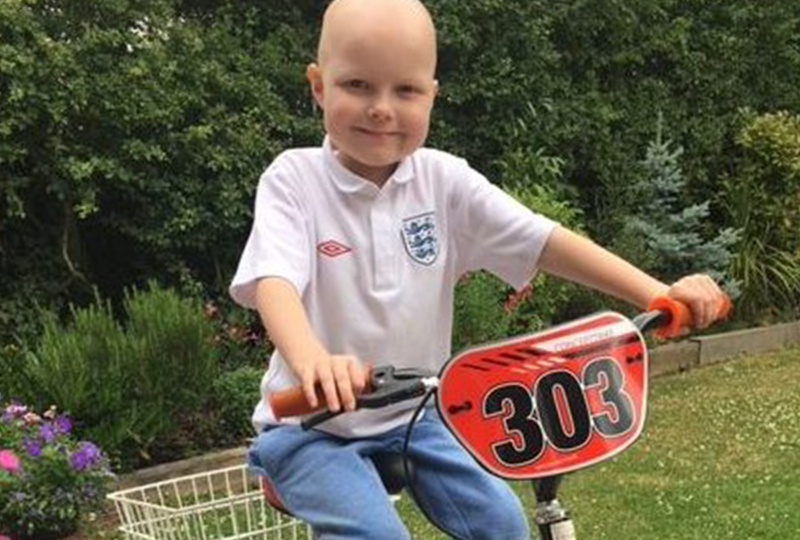 Keeva's doctors were unsure if she would be able to walk again, she's now able to cycle over 2km and is building strength every day! Read Keeva's incredible story...

"Keeva, age 5, is ongoing with her second fight against cancer. She was first diagnosed in October 2014 with Anaplastic Rhabdomyosarcoma of the left thigh and underwent chemotherapy, surgery and protonbeam radiotherapy. Then unfortunately in November 2016 she was re-diagnosed with a malignant bone tumour of the left iliac (pelvis) bone. Again she had surgery to her left leg which this time removed her left pelvis and 30% of her hip socket. This was followed by several rounds of chemotherapy. The doctors were unsure if her remaining hip bone would take the weight of her body and could give no reassurance she would be able to stand or walk again.

Keeva spent 14 weeks in a hip spica plaster cast while her muscles healed.

When the hip spica was removed at the end of March 2017, Keeva bravely took her first new steps. This reassured us her leg could take her full body weight. She then under took weeks of gentle stretching exercises and assistance using a walking frame she was more mobile but still needed assistance as she would walk approx 20 steps. Then the next sessions of physio built up her strength and helped her to walk again.

We then received your wonderful gift of a special tricycle.

The sessions we had using her tricycle gave Keeva the confidence and belief to walk unaided again. Her time on her bike brought the fun back to her exercise program. She can now join in again with her sisters and enjoy riding to the park. Two months on now Keeva's chemotherapy treatment has now been put on hold and her rehabilitation has stepped up. I am glad to inform you she can now cycle 2km and take over 1000 steps unaided, she is getting better and stronger every day.

Again a million thanks to all the team at CFC"